The traditional tools employed in background screenings, from proprietary databases to criminal record search engines operated by government agencies, make the work of investigations firms possible. Nearly any piece of recorded identifying information on an individual can be found using these tools, and yet they fall short of giving employers and screeners alike a true sense of a person’s character. This a major information gap for employers who stand to incur untold financial losses and damage to their reputations from hiring individuals with adverse character traits and unwelcome associations.

The advent of social media as a nearly universal means of communication has added a new layer to the employment screening process. Social media practically demands that investigative professionals take advantage of its unprecedented insight 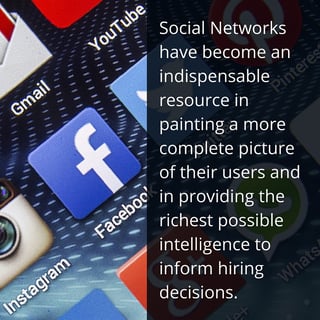 on the affiliations, lifestyles, and belief systems of their subjects. In a word, social networks have become an indispensable resource in painting a more complete picture of their users and in providing the richest possible intelligence to inform hiring decisions.

Social media platforms provide vast stores of identifying information on their members. In the United States, a country of over 320 million with about 87% internet penetration, it is estimated that nearly 43% of all internet users have Facebook profiles. This effectively makes Facebook a massive database containing identifying information and critical insight regarding the associations and character attributes of roughly 192 million people in this country. Instagram, for its part, is projected to reach just fewer than 90 million users by the end of 2016. Meanwhile, Twitter counted 65 million users in the U.S. in the first quarter of 2016—just over 20% of the U.S. population. On a worldwide scale, the statistics are even more astounding: nearly 1.6 billion people worldwide are Facebook users, while Instagram and Twitter have reached 400 million and 300 million global users, respectively. Even when one considers the privacy settings on each of these platforms, the average open-source investigator can access identifying information on hundreds of millions of people through social media. Propriety databases and other long-standing resources employed by investigators simply do not contain this breadth of identifying information.

Screeners ignoring the limitless informational potential of Facebook, Instagram, Twitter, and many other social networks may miss vital information that could impact the hiring decisions of their customers. Proprietary databases contain vast troves of public records and are arguably the most the necessary and indispensable tool of all at the investigator’s disposal, but these alone are not sufficient to capture the unique complexities of a subject’s lifestyle, associations, and value system. For instance, an individual subject to a more traditional screening, which might include the person’s criminal history and a verification of his or her professional and educational background, may have little to worry about if there is no official record of their having engaged in any illegal activities. However, the same subject’s Facebook or Instagram profiles may be replete with photos of him or her in unlawful possession of a firearm or engaging in illicit drug use. Were an investigator to conduct a more traditional investigation of the subject that does not include a thorough review of his or her social media presence, that investigator would inevitably convey a grossly inaccurate assessment of the subject’s character. This, in turn, leaves the client vulnerable to an array of adverse consequences for which he may be held directly liable, from the creation of a toxic office environment to potential workplace violence. It is the unique way in which investigating social networks can protect a client from such consequences that makes them an indispensable component of any background screening.