Dogs have an incredible sense of smell, with up to 300 million olfactory receptors in their noses, compared to about six million in humans. And the part of a dog's brain that is devoted to analyzing smells is about 40 times greater than ours. Most canines enjoy a “job” that keeps their bodies busy and their brains occupied – which is one reason why they make terrific bomb dogs. When it comes to work like this, once a dog understands that their task is to find a certain scent in exchange for a reward such as food or a toy, look out. The eagerly take on the task with endless gusto. 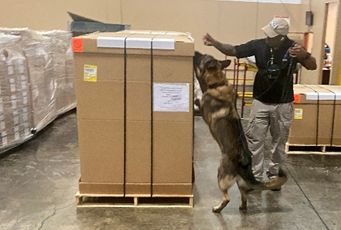 The Most Efficient and Effective Explosive Screening Solution

It is widely acknowledged that canines are the most capable, effective and efficient method for real-time detection of explosives in a variety of environments. In fact, Popular Science reported that after $19 billion was spent over six years, the Pentagon concluded that the best bomb detector is a dog. This understanding has led to a worldwide increase in their use across the private and government sectors. Will any canine suffice for this very critical job? The simple answer is no. Only a properly imprinted and trained canine meets the highest-level performance expectations and provides optimal field experience in detecting explosive borne threats – regardless of how the threat is presented. To meet rigorous standards, MSA’s successful EDC Program is rooted in a proven 6-phase philosophy.

The average person attending a sports event, visiting a landmark or traveling through a transit hub may take quick notice of an EDC team on the move without much thought. Their discrete presence is by design to help maintain comfort and peace of mind for the public. Completing the demands of rigorous EDC training protocols, handlers and their tail-wagging partners are well prepared and carry the extraordinary skills required to keep the public safe.